By globally rolling out water-saving products, the TOTO Group has been promoting the initiatives to reduce water consumption during the product use phase and conserve water resources in the respective areas. As compared to if 2005-era products continued to be distributed, we reduced water consumption by 1.0 billion ㎥ in FY 2021.

As the target in WILL2030 STAGE1, we aim to reduce water consumption by 1.1 billion ㎥ in FY 2023 and strive to expand and commercialize water-saving and energy-saving products.

Transition of Reduction of water consumption during product use

Shipment rate by quantity of water per flush(Japan,overseas)

Advancing the water efficiency of toilets

The TOTO Group has achieved a further enhancement of the water-saving performance of toilets, which use more water than any other plumbing equipment in the home for maximized contribution to the environment by saving water.

In Japan, TOTO released a new toilet that uses 13 liters per each large flush in 1976, achieving water savings of 35% compared to earlier toilets. Since then, we have continued to increase water-saving efficiency by Tornado Cleansing, developed for the first time anywhere in the world in 2002 and other products, subsequently releasing a toilet using 4.8 liters per flush in 2009, and a super water-saving toilet using 3.8 liters per flush in 2012.

Overseas too, we similarly released a 4.8-liter toilet in the United States and China in 2006, even before its release in Japan.

Since then, we have released a 3.8-liter water-saving toilet intended for the US and Chinese markets, as well as our 3.8-liter NEOREST toilets featuring Washlet equipped with a toilet bowl cleaning function “eWater+” and our new photocatalytic technology “Actilight” intended for markets in the Americas, China, Asia/Oceania and Europe.

Evolution of water-saving performance (in Japan)

Developing and expanding the use of water-saving toilets

In countries around the world, strict regulations on the volume of water used per flush have been instituted as a measure to combat water shortage problems.

Since even before these regulations, the TOTO Group has been committed to making positive contributions to the environment through its business activities, by making our 4.8-liter toilets the global standard, and by globally promoting the use of water-saving toilets that use less than 4.8 liters per flush.

We will continue to contribute positively to the protection of water resources through our business activities by promoting the widespread use of water-efficient products around the world.
We have developed water-saving toilets that meet stringent regulations around the world with the needs of customers in mind. 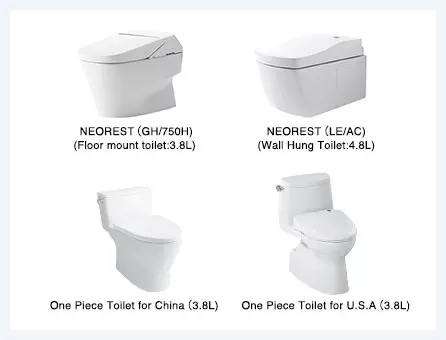